The pivotal role of internet in modern life is emphasized by the United Nations which issued a resolution claiming that access to the internet is one of the basic human rights and calling on the Member States to prevent the digital divide.

How expensive is the internet nowadays? Where is surfing the net the cheapest? In which countries is super-fast internet easy accessible? And is the internet in South Africa really so expensive? Picodi.com analysts looked into pricings of 233 biggest fibre internet providers in 62 countries and answered these questions.

Please note that the compilation only includes unlimited residential internet plans, without television or phone bundles.

100 Mbps ought to be enough for anybody

The comfort of using the internet depends on many factors. Among them, there is a nominal speed, the network’s technology, a wireless interference, network load, but also quality of the visited website and the distance to its hosting server location.

According to Speedtest.net, the global average speed of broadband internet amounts to 70 Mbps (December 2019). On the other hand, 100 Mbps is the speed offered most frequently in the majority of countries — 55 out of 62. Today, such speed allows for smooth web browsing on several devices at the same time and watching streaming services in the highest 4K resolution (UHD).

Oddly enough, in some countries, like Poland, Romania, France or Singapore, major internet providers do not offer such a “low” speed. In Poland and Romania, the lowest plan available is 150 Mbs, in France — 200 Mbps, and in Singapore — 500 Mbps. On the other hand, in countries like Tajikistan, Turkmenistan or Vietnam, the 100 Mbps speed is not yet widely available. 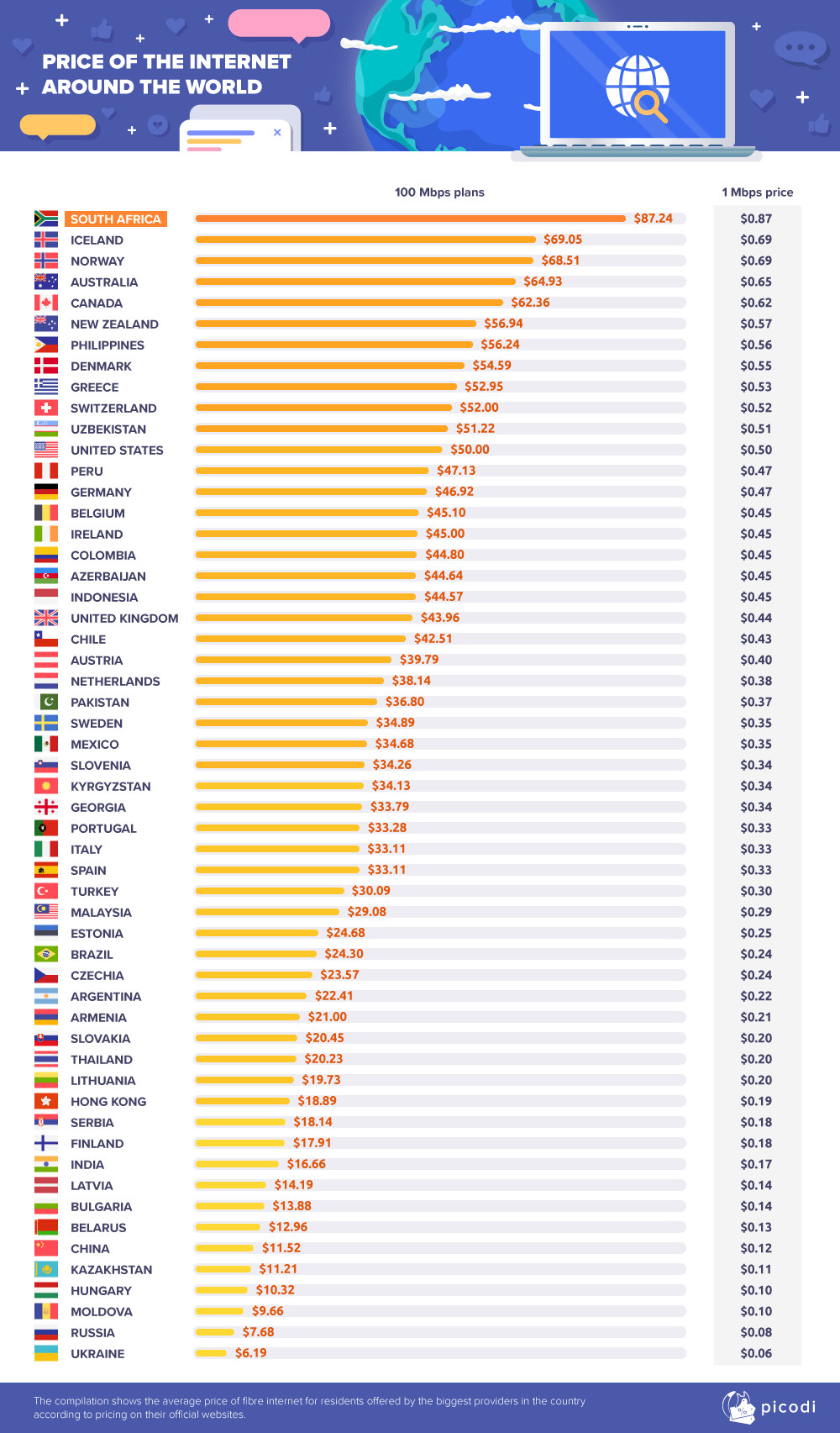 Among the considered countries, the biggest price for 100 Mbps internet was in fact noted in South Africa — $87 a month. It is more than people living in North European countries, like Iceland or Norway, who pay around $69 a month.

Internet for up to $20 a month

“We decided to present the data differently: what internet speed can you afford for the equivalent of US$20 (around R298) per month?,” says Picodi.

Out of 62 countries included in the report, 25 could not be ranked. South Africa, Australia, Brazil, Germany, Switzerland, Chile, Italy, Portugal, and the USA — in these countries, the unlimited fibre internet for residents from major providers costs more than $20 a month.

The infographic below shows the results for specific countries. 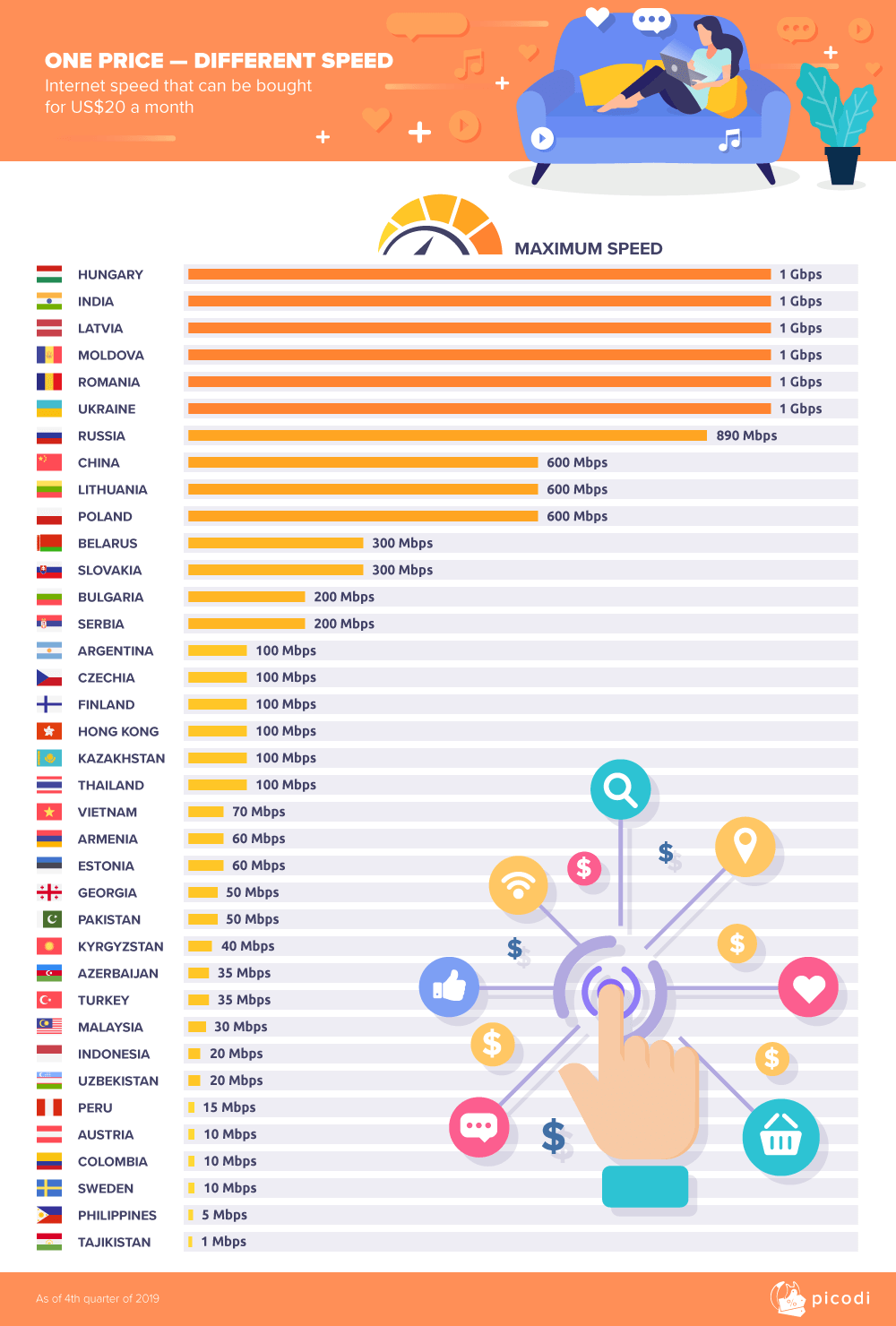 The highest internet speed, which turns out to be 1 Gbps, can be found in Romania, Moldova, India, Hungary, Latvia, and Ukraine, with the price under $20 per month. Such amount of money is enough to afford a super-fast internet plan in Russia (890 Mbps), China and Lithuania (600 Mbps in both).

In theory, with 1 Gbps internet speed, a 1 GB file can be downloaded in 8 seconds. In many countries, such speed is the highest plan in the offer. However, the purpose of this report is not to prove if, and what for such a speed is needed. We only checked in which countries 1 Gbps internet is available for residents, and how expensive it is. 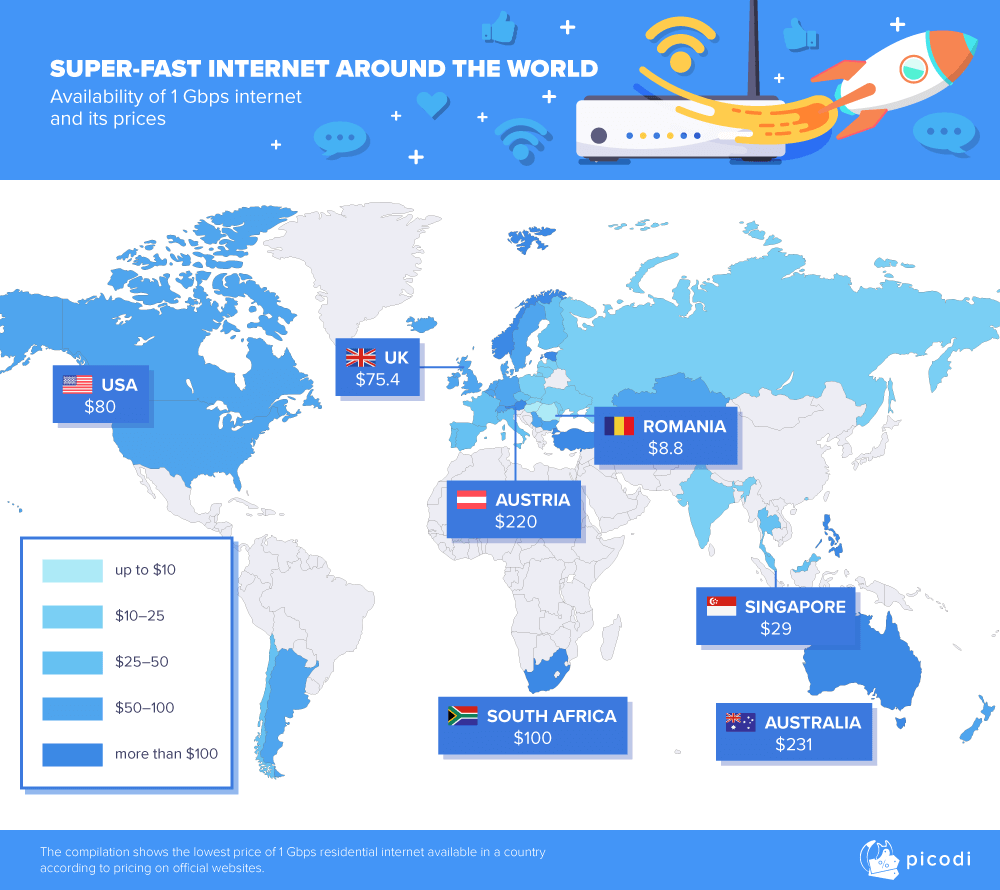 According to Picodi.com data, in many countries, 1 Gbps internet is a high-cost luxury. In 24 out of 44 countries where providers offer such speed, a monthly price exceeds $50. Super-fast internet is the most expensive in Austria and Australia, at $220 and $231 respectively. On the other hand, the cheapest 1 Gbps internet is available in Romania, at just $9 per month. In South Africa, the 1 Gbps plan is on the pricey side — $100 a month.

This research covers 62 countries, including G20 countries, the largest English and Spanish speaking countries, as well as former USSR countries.

“We took into consideration major internet providers offering unlimited residential fibre internet or the most advanced technology available in the country. We included prices applicable after the end of a limited-time promotional rate. We excluded bundles consisting of several services, like internet plus television or internet plus paid streaming services. We omitted smaller local providers working in the area of one province or one city. If rental of a router is subject to a fee, we included it in the price.”

The whole list of countries and providers is available here.

For the currency conversion, we used the average exchange rate for October and November 2019

Fight For Control Threatens To Destabilize And Fragment The Internet

There’s Never Been A Better Time To Install Fibre. Here’s What You Need To Know

Starlink From SpaceX Has The Potential To Bridge The Digital Divide

Getting What You Pay For When It Comes To Home Fibre

The Top10 – An Easy Fix To A Complex Market